This short blog entry is about the (hobbyist level) casting of a simple counter-top. I always wanted to do some everyday life stuff with epoxy resin so the water damage after a leaky water tap in a flat turned out to be the perfect opportunity for casting something simple. After having some previous experience for epoxy resin for potting electronics and sealing high pressure vacuum chambers - and as well as adding a black layer of resin on top of a simple coffee table (as shown in the photograph below) I decided to go with some - about 5 kg - of E45 epoxy (Affiliate link) This might not be the best idea since this has a pot life of about 45 minutes - this might be too short depending on what you’re planning and how you’re processing. If your working fast enough - especially during the degassing steps - this epoxy is great for food related stuff since it’s exactly the same material that’s also used inside of metal cans. 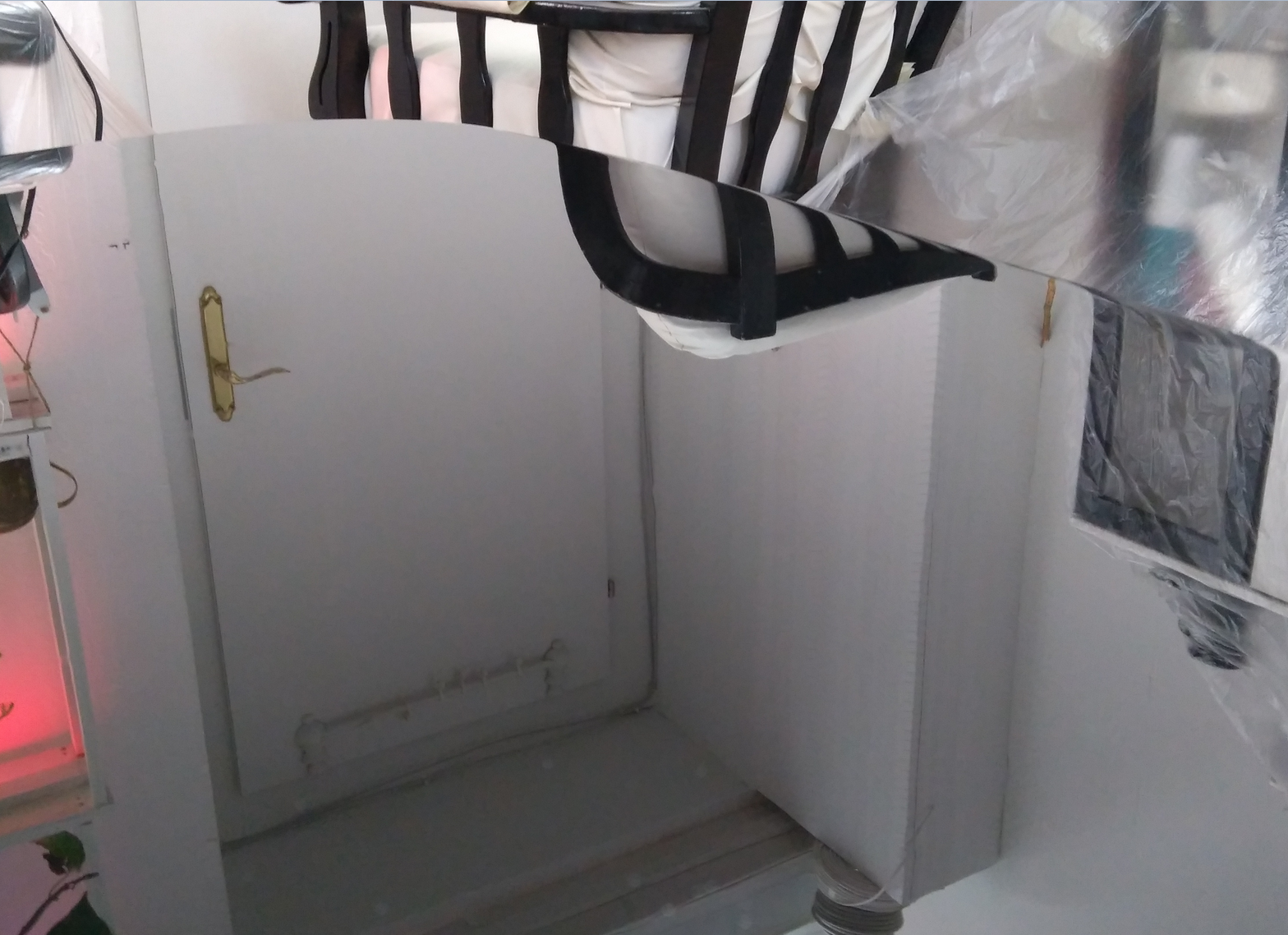 Epoxy can be mixed with acrylic dye - but beware that not every dye is really suited for epoxy. Some form clumps, others do not distribute evenly. It’s wise to use pigments (Affiliate link) that are specifically designed to be used with epoxy. For vertical or highly inclined surfaces one should also use gel-coat resins that have already included thixotropic agents that make them less viscous.

First - since the whole kitchen cabinet has been damaged - a substructure hat to be built. This has been done using simple laminated pressboard boards. They’ve been cut to size using a circular saw. Since that wood is already laminated no surface treatment was necessary. All parts have been connected using trunnels as well as wood screws (Affiliate link). The basis for the countertop has also been built using 20 millimeter wood as the other parts of the substructure. 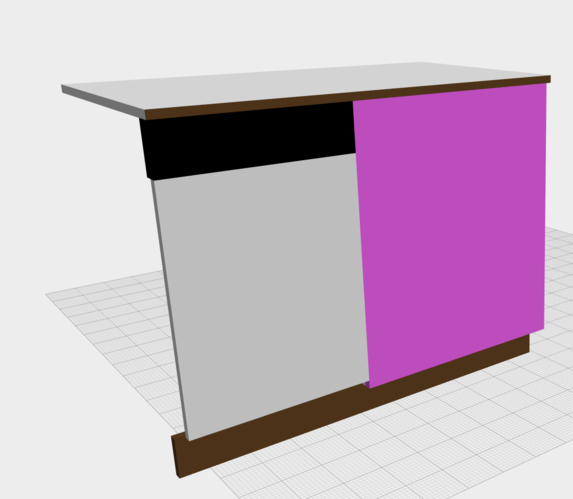 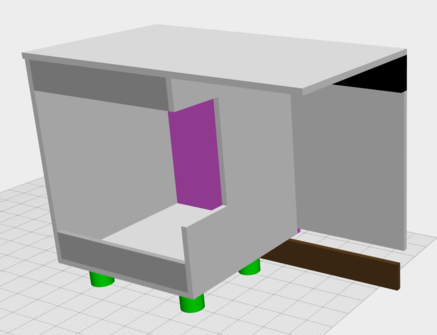 Note the left hand side of the substructure looks different than the right hand side since this is a dishwasher that get’s fitted. After applying a wooden board to the front of course all frontpanels will look the same.

The sink was already present and should be continued to be used - at least as a template - so the required hole has been cut using a milling machine (Affiliate link). Since only 20mm wood has been used the part of the countertop carrying the sink has been reinforced by steel sections (Affiliate link) that had been cut to the required length - this would not be needed when using a thicker type of solid wood or multiplex boards. As the old sink was already looking pretty bad it was coated using acrylic sprays (Affiliate link) and two epoxy layers on it’s own. After this coating has been applied the surface was again even, perfectly homogeneous white and scratch resistant. The drainage hole has been cut using a keyhole saw (Affiliate link). 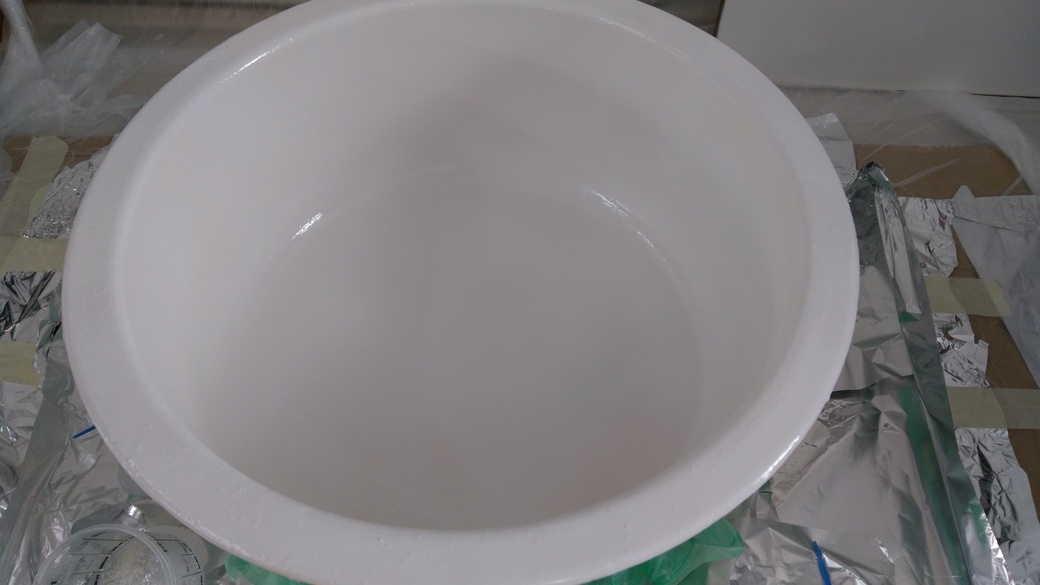 Note that epoxy is really fluid and is entering any gaps or porous surfaces. First one should seal all edges that should not be penetrated using silicone or acrylic glue so they’re totally tight. Surface such as untreated wood should be expected to soak up much epoxy - one can counter that effect by simply using coated wood as formwork during casting which is exactly what’s done for epoxy resin tables. In this case the epoxy is desired to be soaked up into the raw wood to seal up and provide protection against water and vapors. Also keep in mind that epoxy is not easy to remove so you should cover up nearby surfaces that should not be destroyed or glued by the epoxy - and keep in mind that it gets soaked up by a huge bunch of materials, it’s not wall paint.

In case of the countertop the space between the wooden surface and the tiling has been filled with acrylic glue and tested to be tight. The surface was left uncased and open towards the front. This means that excess epoxy is dripping down at the edge which also means that one has to remove blobs during the first hours after the pour that form on the bottom of the countertop and keep the front clear by ensuring that epoxy is flowing over the edge at all positions. It also means that one should of course cover the floor to prevent damage - don’t plan to simply wipe away overflowing epoxy from your floor - that won’t work.

Just as a last comment about surfaces: Keep them clean before pouring. Any dust or particles on the surface will stay there and might lead to uneven casts. 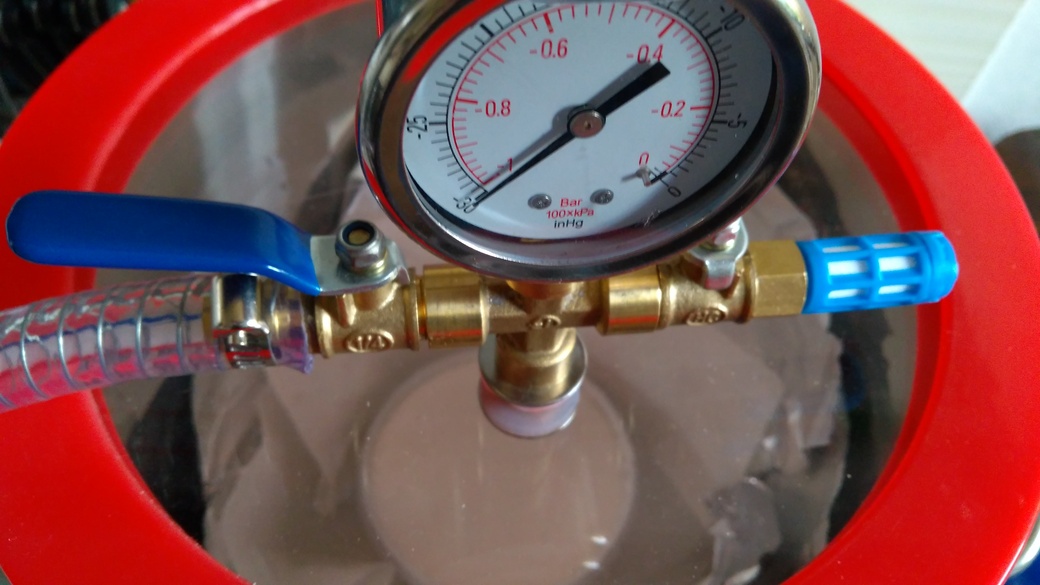 After previous experience with using epoxy without outgassing and heavy buildup of bubbles this is the first time I really cared and thought to try out evacuation to remove trapped air bubble from the resin before casting. This turned out to work even better than I’ve imagined. On the previous table project bubble buildup has been a major problem - one had to use a heatgun to remove them continuously even hours after pouring. After degassing not a single bubble occurred. Outgassing has been done at approximately 75 pascal using a single stage rotary vane pump and a stainless steel - acrylic glass vacuum chamber. Note that the acrylic glass extremely limits the abilities of a vacuum chamber (at least if I as a physicist think about vacuum) but it’s really way enough to outgas resins or other workpieces.

A vacuum chamber and single stage rotary vane pump can be bought pretty low prices. It’s not totally necessary to outgas resin but it’s really a huge improvement in handling quality as well as the result.

Because I’ve used a rather fast E45 epoxy resin system (Affiliate link) I decided to first outgas all components before mixing them. Note that the hardener is also highly hygroscopic - i.e. it tends to capture water vapor that lowers or even stops it’s capability of curing. That sounds way worse than it really is - it just means that you shouldn’t let the hardener stay open for a longer period of time in humid areas as well as it limits shelf / storage lifetime to about one or two years. The hardener doesn’t capture that much air though. The resin itself - in this case Bisphenol A - captures gasses.

I first outgassed the hardener for about 5 minutes and then the resin for about 12 minutes as can be seen on the following video. I just put the resin into the vacuum chamber, lowered pressure down to about 75 pascals and waited till no more bubble have been visible.

After the outgassing step of all components they’re mixed according to the manufacturers ratio - try to stay as close as possible to the specified ratio. Adding more or less hardener doesn’t make your process faster or slower. It’s a chemical reaction that takes place - everything that’s available too much simply won’t react and stay in it’s original form. This means that missing the correct ratio of components just leads to sticky or even fluid and less scratch resistant surfaces. It’s a good idea to use a simple kitchen scale (Affiliate link) to mix according to weights. It’s also really important to provide a good mixture - keep stirring the epoxy and also scratch the walls and bottom of your mixing container till you don’t see any smearing any more. Also don’t try to mix too much epoxy inside a too small container or pour layers that are too thick - stick to the manufacturers instructions that fit your epoxy system. This is required since the chemical reaction is exothermic so the heat has to be transferred out of the resin during curing. The instructions given by the manufacturer are calculated by reaction rate vs. thermal conductivity of your epoxy. Don’t try to cool down the epoxy too much though since that may stop the reaction - even permanently. Usually epoxy cures best between 25 and 35 degrees Celsius - but again stick to the instructions of your manufacturer. If you don’t the resin might end up not curing at all or building bubble due to boiling.

Note that outgassing of the mixed epoxy (resin, hardener and pigments) lead to the largest gas release and bubble formation. Because of this one should carefully control pressure to prevent overflow - and as with any vacuum system prevent large pressure changes - change pressure slowly but keep in mind that the mixed epoxy has a pot time somewhat below the specified time of the manufacturer and that you’ve to pour it during that time. And keep in mind that heat transfer is also hindered by the vacuum inside the chamber. Just keep the epoxy inside long enough to remove all large bubbles - in the best case if you’re epoxy is slow enough wait till no more bubbles are formed. Be careful when repressurizing the chamber to not spill around your epoxy.

Don’t be afraid of epoxy getting hot though - usually it should not heat above about 45 Celsius but if you make mistakes during mixing it might even reach temperatures above 110 Celsius as can be seen in the image below in which too much non degassed epoxy has been mixed - the boiling water vapor and gas bubbles lead to epoxy foam buildup that expanded somewhat like Polyurethane was pretty strong in the end: 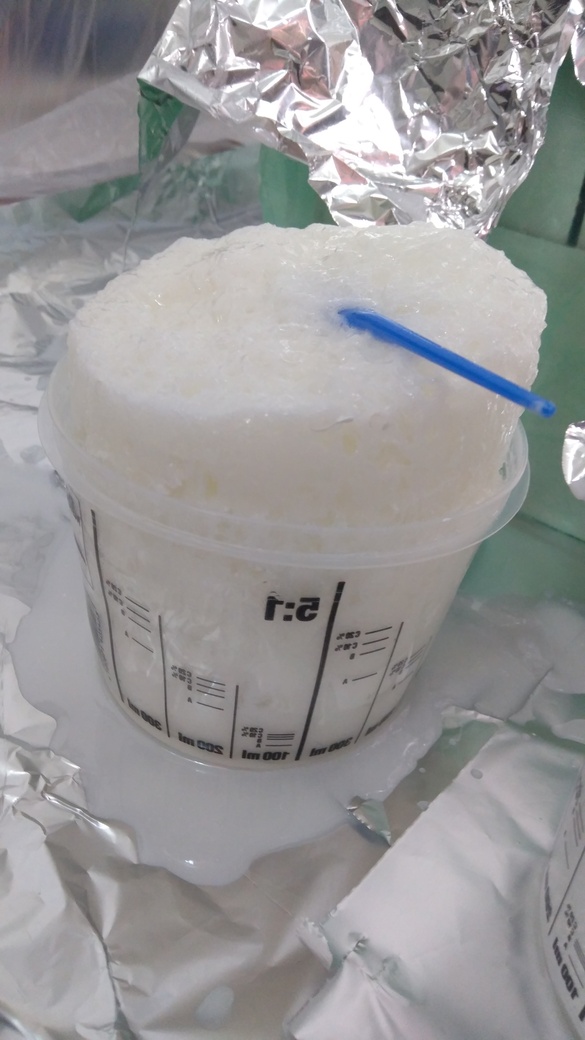 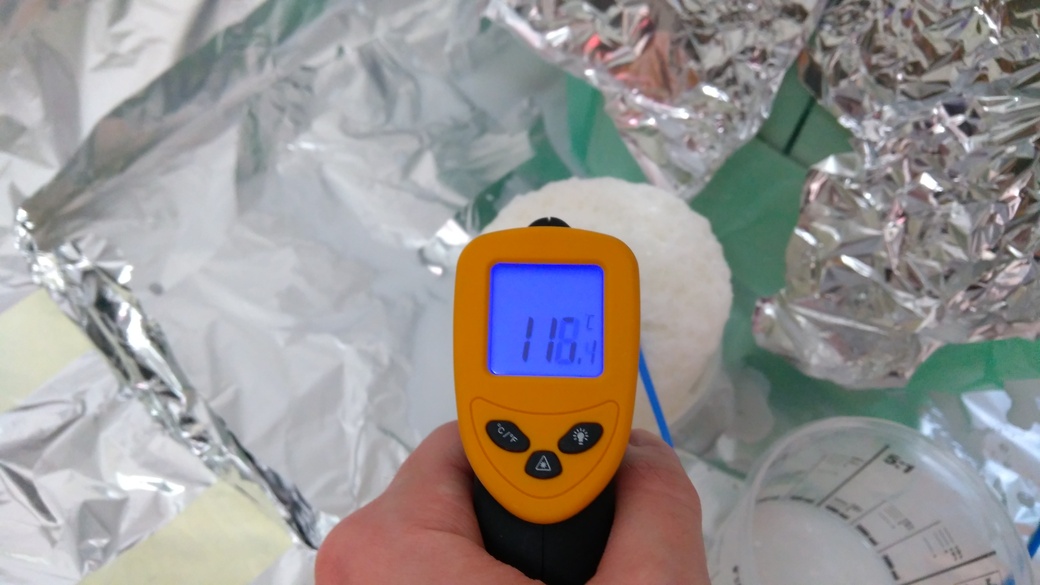 After outgassing the epoxy can be cured over the flat, smooth and horizontal surface. Don’t try to do too much corrections using brushes or rolls - they’re good to force distribution over large surfaces like floors but usually you should let gravity drive the distribution and evening of the epoxy to get best results. The following image shows an intermediate stage after the first layer had been poured. At the end the epoxy layer is thick enough to cover the sink as a whole - it looks like the sink is part of the countertop (images will be uploaded soon) 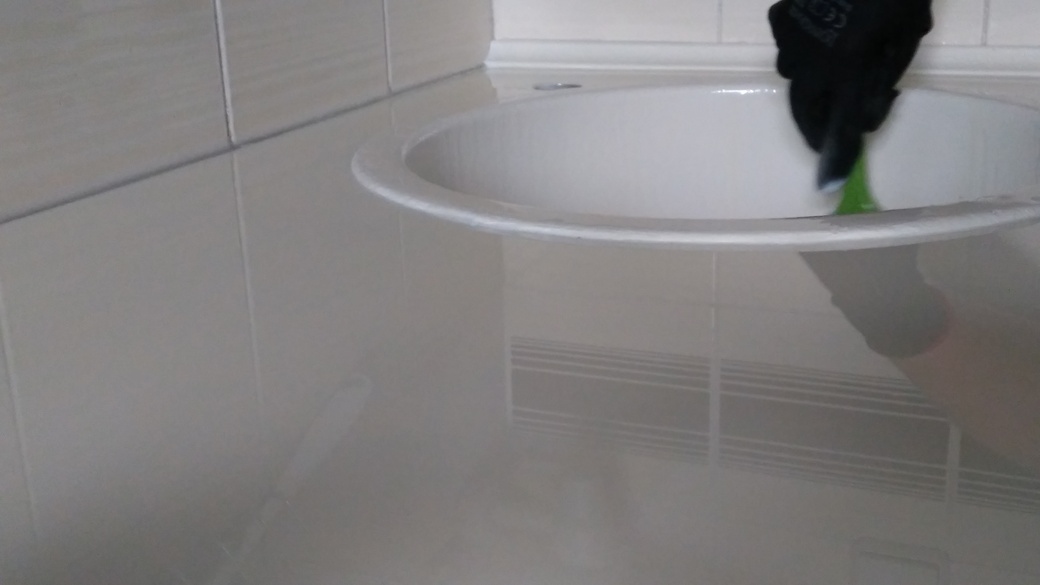 Look for bubbles - in case of good outgassing there shouldn’t be any. In case bubbles occur they can be removed using a hot air gun or a gas burner by blowing them away gently and letting the epoxy reflow into the hole again. You might also be capable of bursting bubbles using the tip of a paintbrush.

If you desire a thicker pour of epoxy like it was desired in this project one should cast in multiple layers. Again consult the instructions of your particular epoxy to determine if one should cast a few hours later or after the hardening has been completely finished. For the epoxy I used it didn’t really matter if one poured 4-8 hours or 2 days later. 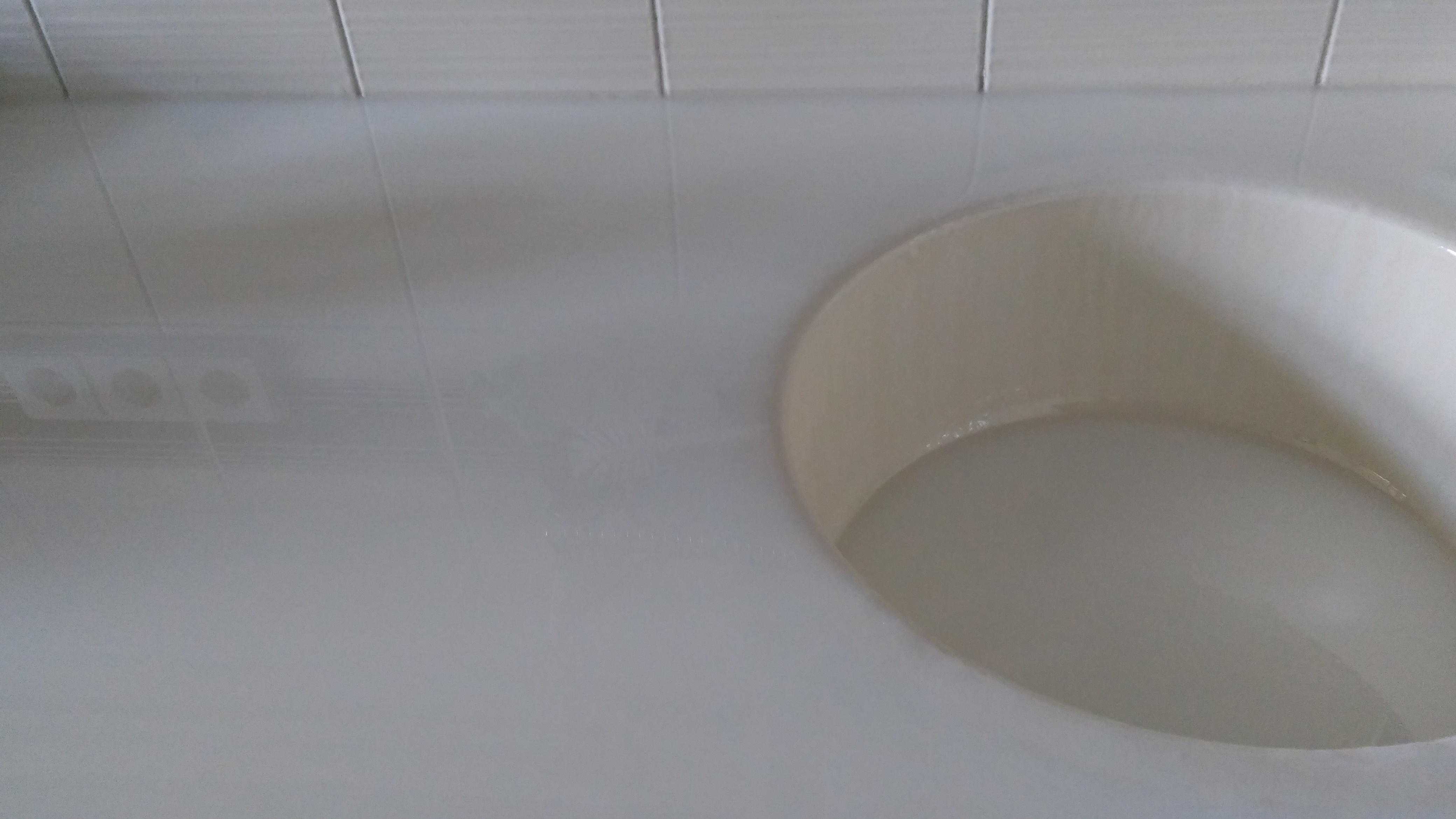 Note that if you have to cover larger vertical areas it’s a good idea to use silicic acid to reduce fluidity of the resin. Don’t try to wait till it gets sticky to distribute it using brushes or rollers - that won’t work. On German silicic acid is called Kieselsäure and is available at specialized shops like Breddermann-Kunstharze. You’ll have to look up a local supplier though.

Marbling a surface is pretty easy when using epoxy and acrylic sprays (Affiliate link). Simply apply them in different colors with enough distance. Don’t be shy - I was during my first marbling experience on epoxy and it really looks catastrophic during the first stages of the process but it’s really easy and works pretty well. Just make some stripes and dots with one color, then take the next. The following was made with a combination of white pigmented epoxy combined with silver, brown and gold spray for a different project: 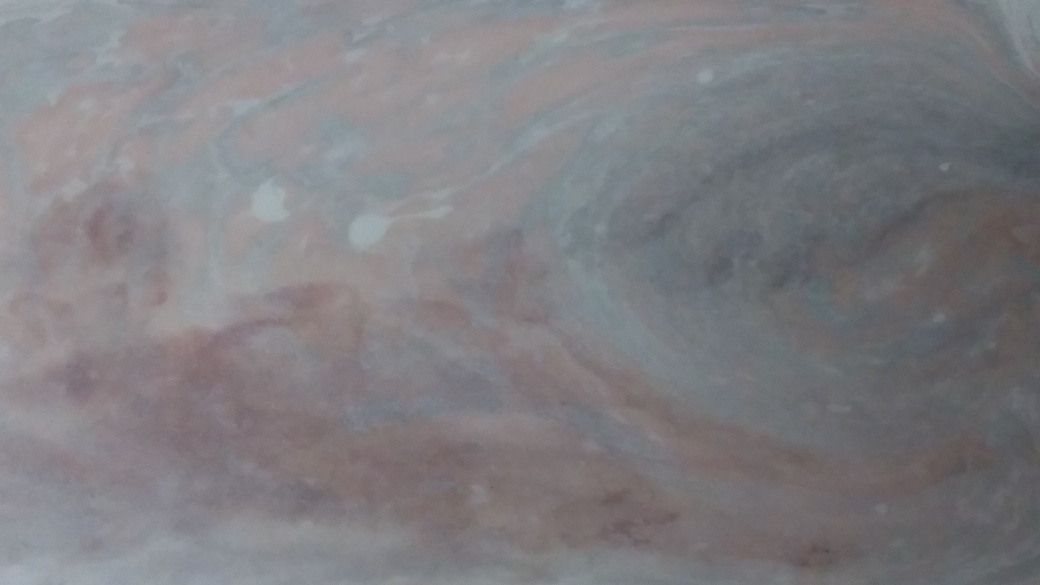 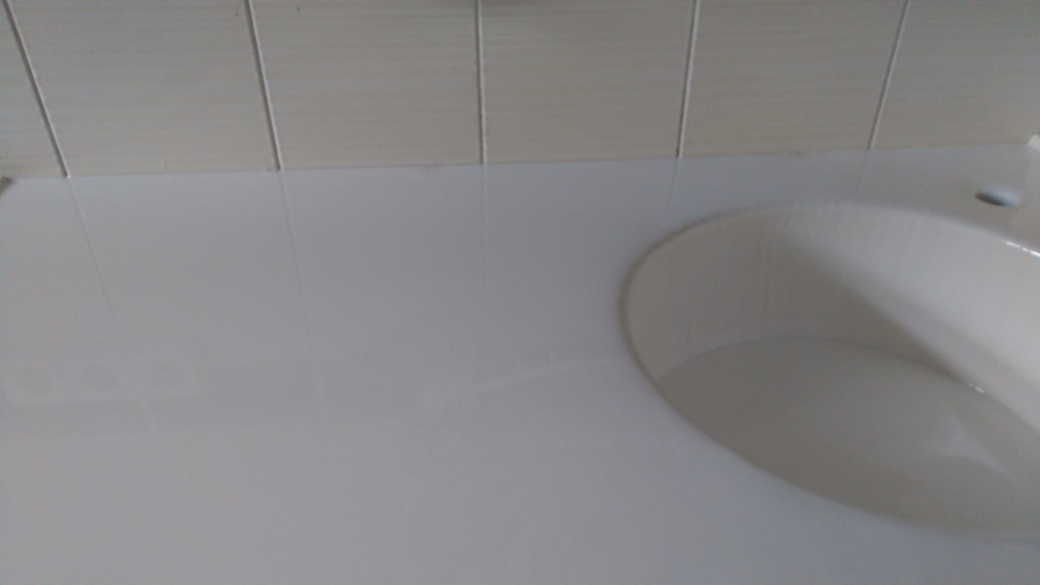 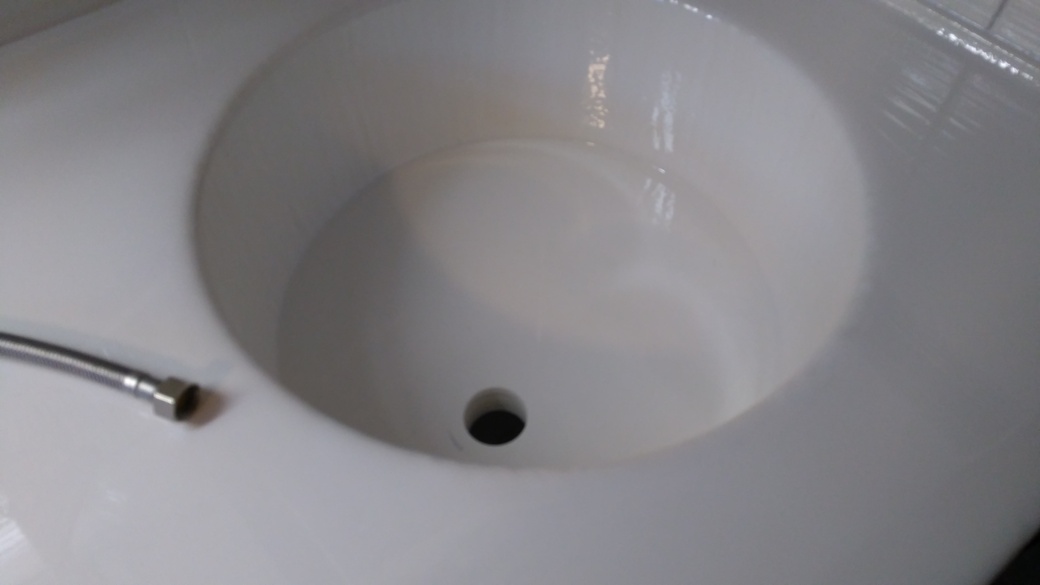 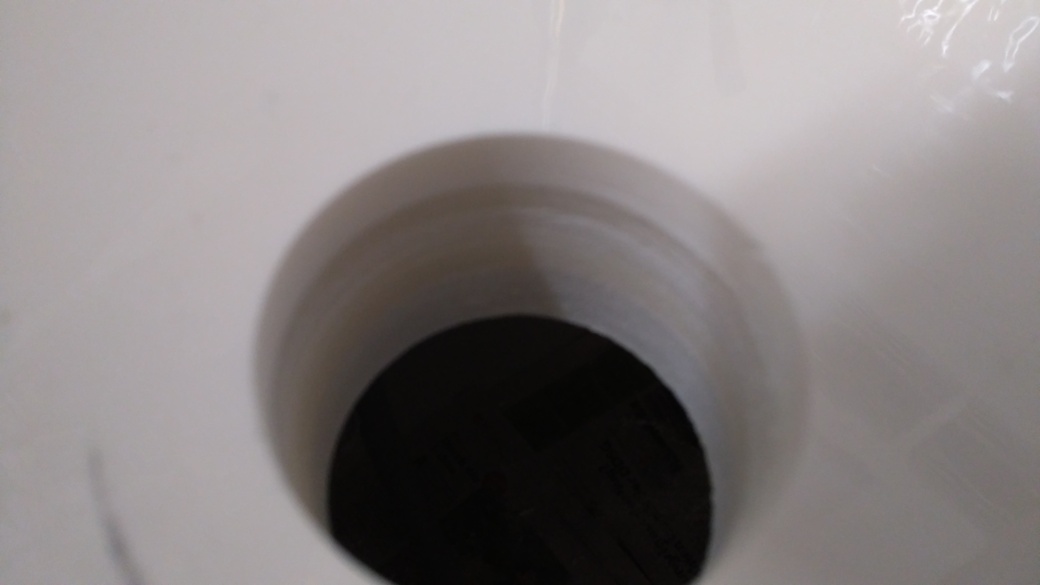