Hot cathodes are one of the most common used sources for electrons inside cathode ray tubes, vacuum tubes, electron microscopes, particle accelerators, microwave oven magnetrons, fluorescent lamps, etc. Basically they work on the principle that electrons are held back by a potential - called work function - to leave the surface of a conductor. As soon as one adds enough energy to an electron it is able to leave the surface and one is then able to accelerate the free electron towards a target. For hot cathodes this additional energy is provided by heating the cathode - as one will see below the work functions start around $1 eV$ for special materials and thus required temperatures are usually starting above $1000 K$. This limits the number of available materials - usually one would like to have an material that one can heat to high temperatures that has a low work function and as high as possible Richardson constant (see below at Temperature). Thermionic sources are usually used for current densities up to around $1 \frac{A}{cm^2}$.

Note that besides hot cathodes there are of course also cold cathodes available. These work by different processes - field emission cathodes for example provide a high enough potential to literally rip the electrons out of the cathode material which is achieved by high fields and sharp tips so that the field strength is high enough to overcome the work function. Field emission cathodes are more and more commonly seen in scanning electron microscopes and particle accelerators due to the tight energy spectrum one can produce with high currents. Other sources are working on secondary electron emission.

One has to differentiate between two basic types of hot cathodes: 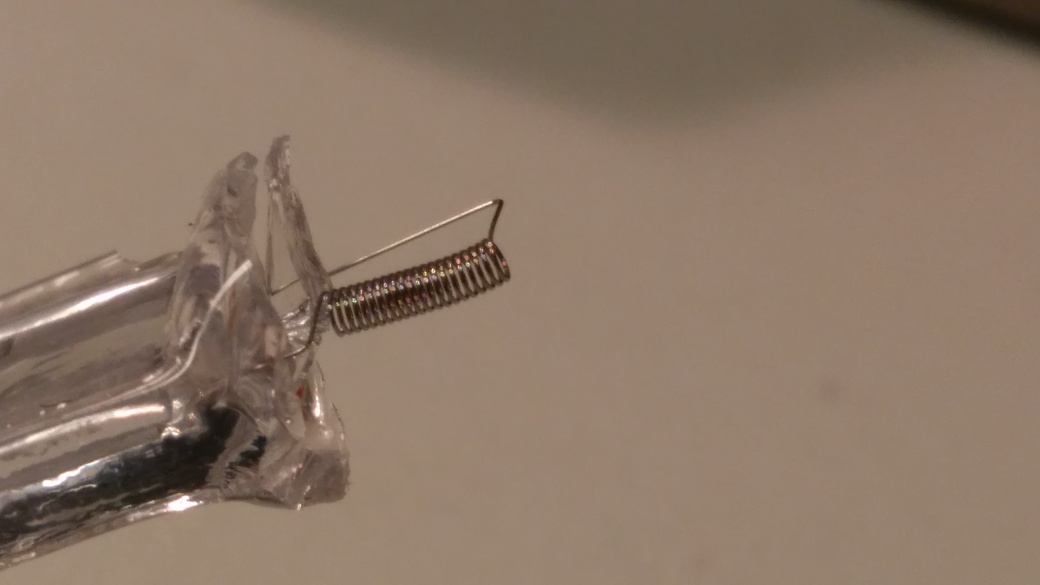 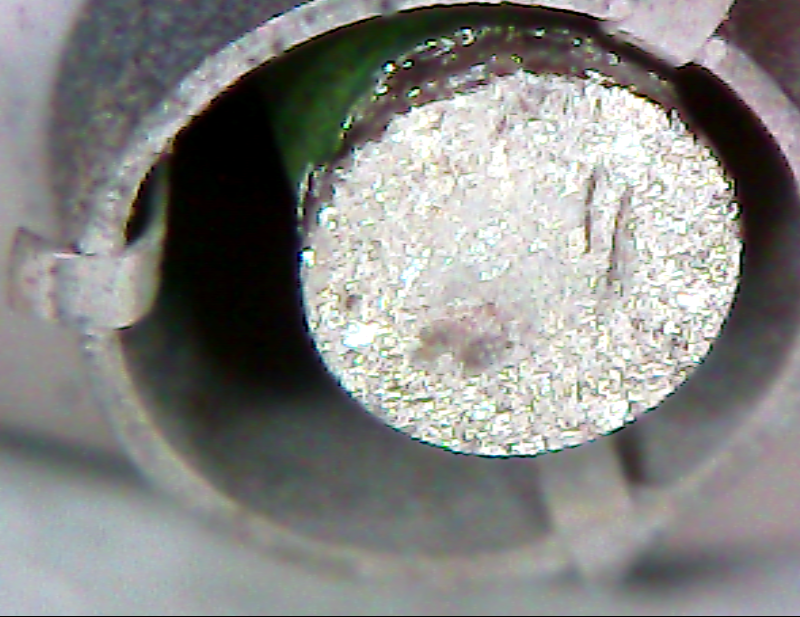 The type of the cathode usually depends on the application. Directly heated cathodes are found for example in fluorescent lights as well as some electron microscopes. indirectly heated cathodes are used many times in precision vacuum tubes. The main reason for their usage in vacuum tubes is to insulate the potential from the heater from the potential of the cathode itself to prevent influence of the alternating heating current that’s many times directly tapped from a transformer - and it allows to use one central heating power supply even if one uses multiple tubes at different cathode potentials.

There are three main limiting factors to emission current of cathodes:

Another important limiting factor for the whole system is Liouville’s theorem that provides a constraint to phase space volume after the initial emission.

At lower temperatures the emission current is limited by the temperature of the cathode. Thermionic emission happens because the thermal energy given to the electrons is high enough to overcome the work function $\psi$ of the specific material.

Note that the constant $A$ is just a constant in theory. As it turns out it’s a material specific constant that also depends on the crystallographic orientation. Typical values can be seen above. 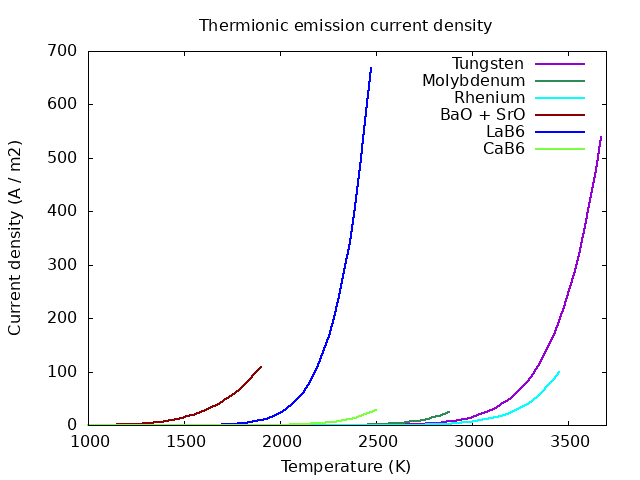 As one can see from the graphics cathodes from pure tungsten look like one of the most promising - this is usually not directly exploitable because of the high temperature required. In many modern hot cathode scanning electron microscopes one can see either pure tungsten or LaB6 dispenser cathodes - for these devices the cathodes are considered an somewhat often to change consumable (you usually buy them in quantities of $\geq 10$ pieces). Many cathode ray tubes - for example the ones used in oscilloscopes - and in many vacuum tubes one can find BaO/SrO cathodes since lower heating current usually also implies longer lifetime.

The space charge is caused by an cloud of electrons that are gathering around the cathode after being thermally emitted. At some point the electric field of the emitted electrons is large enough to repel electrons back into the cathode. At this point in time the only way to increase current is to apply a larger potential.

In this case $V_a$ is the anode voltage and $d$ the spacing between anode and cathode.

Cathode size provides another way of increasing the current capability of an cathode - since the above equations all describe current density it’s possible to increase the maximum possible current approximately linearly with the surface area of the cathode itself.

Note that due to Liouville’s theorem the phase space volume of a given system (in this case the electrons that form the beam or the electron / ion bunches) has to stay constant. Since the phase space is describing spatial and momentum distributions one can - for example - not simply increase the size of the cathode and achieve a similar focus with the same sharp momentum distribution. Out of this reason one usually used the Wehnelt cylinder assembly to select only a specific small part of the cathode from which electrons are sources (i.e. one performs an momentum range selection by applying a more negative charge at the Wehnelt assembly and does extraction through a tiny hole). This basically fixes the phase space volume until the beam hits the target or some kind of aperture or interacts with other particles.

This is usually caused by poisoning by water vapor, glass dust, plating, welding splash, sulfur from the steel used in poles, etc. Sometimes it’s also caused by loss of emitting area by lost tips, chip formation and ion bombardment. It might also be caused by reduced operating temperature.

Poisoning may also be caused by exposure to CO2 from environmental air. Exposure to CO2 leads to buildup of Barium-carbonate (BaCO3). This is usually less of a problem since it dissociates at temperatures above $1573.15 K$ into CO2 and BaO again. This is the same process that also happens during activation for BaO/SrO cathodes.

This sometimes happens when one has used the cathode while clamping the heater legs with steel set screws. Materials containing sulfur, iron, oxygen, chromium, nickel must not be in contact with hot heater wire or it will lead to a more brittle tungsten wire.

The exact mechanism behind this problem is not totally known. The basic idea is that water vapor gets absorbed into the tungsten matrix. As the temperature increases above the evaporation temperature of water vapor the the given pressure the expanding vapor destroys the cathode surface.

This can simply be countered by slowly heating up (about half an hour to operating temperature) while closely watching the pressure in the chamber to stay below $10^{-7} mbar$.

Blooming happens with cathodes such as the highly hygroscopic Barium-calcium-aluminate cathodes when the oxide gets converted into carbonates. This then leads to volume expansion from the inside of the pores of the tungsten emitter and pushes against the impregnant.

Blooming can be brushed of up to a certain extend - after which one might see a slightly larger gas burst during first heating.

Some cathodes might survive at (dry) air for a month without noticeable effects.

This is an failure mode that might happen for indirectly heated cathodes. They’re usually using tungsten heating wire potted to the backside of an emitter disk. On these disks negative oxygen ions might be drawn towards the heater where they cause oxidation. This might lead to the buildup of a tungsten-oxide layer that’s then dissolved into aluminum and thus forms Aluminum tungstate. this tungstate has a way lower resistance than the used potting material and thus lead to way higher leakage currents.

This effect is of course less problematic when the heater wire is negative with respect to the emitter since this does not attract oxygen ions. This is especially important for direct current heated heater filaments.

Excess Barium evaporation has been a huge problem during the early days of tube development.

Increasing current at the end of the lifetime

Usually the cathode dies by evaporation of the heater wire. As the end of lifetime approaches the wire gets thinner - and thus the cross section gets reduced more and more which increases electrical resistance. Since the current stays practically constant the temperature of the thin area increases and speeds up evaporation. Due to the higher temperature the number of thermally emitted electrons increases a short time before cathode failure when not operating in space charge limited but in thermally limited regime.

One of the most common used cathodes in cathode ray tubes as of today is the Barium/Strontium Oxide cathode. Since the material is susceptible to humidity and oxygen in environmental air they’re usually manufactured / delivered in a non activated state - in form of a BaSr(CO3)2 coating.

This is a two stage process. In the first stage the Barium-Strontium carbonate is thermally decomposed at temperatures above a temperature of $1573 K$

In the second stage the barium oxide $BaO$ and $BaSrO_2$ reacts with activators inside the Nickel cap (usually impurities such as Aluminum and Magnesium):