Who doesn’t know this problem. You try to pump down your vacuum chamber - maybe even having luck using your turbopump. But as soon as you try to switch to ion pumps or reach lower pressures something starts to outgas or leak and prevents you from reaching low pressures. Usually then you start looking for the standard problems:

In some cases this might turn out to be unsuccessful and then you open up the chamber and discover it being covered in oil: 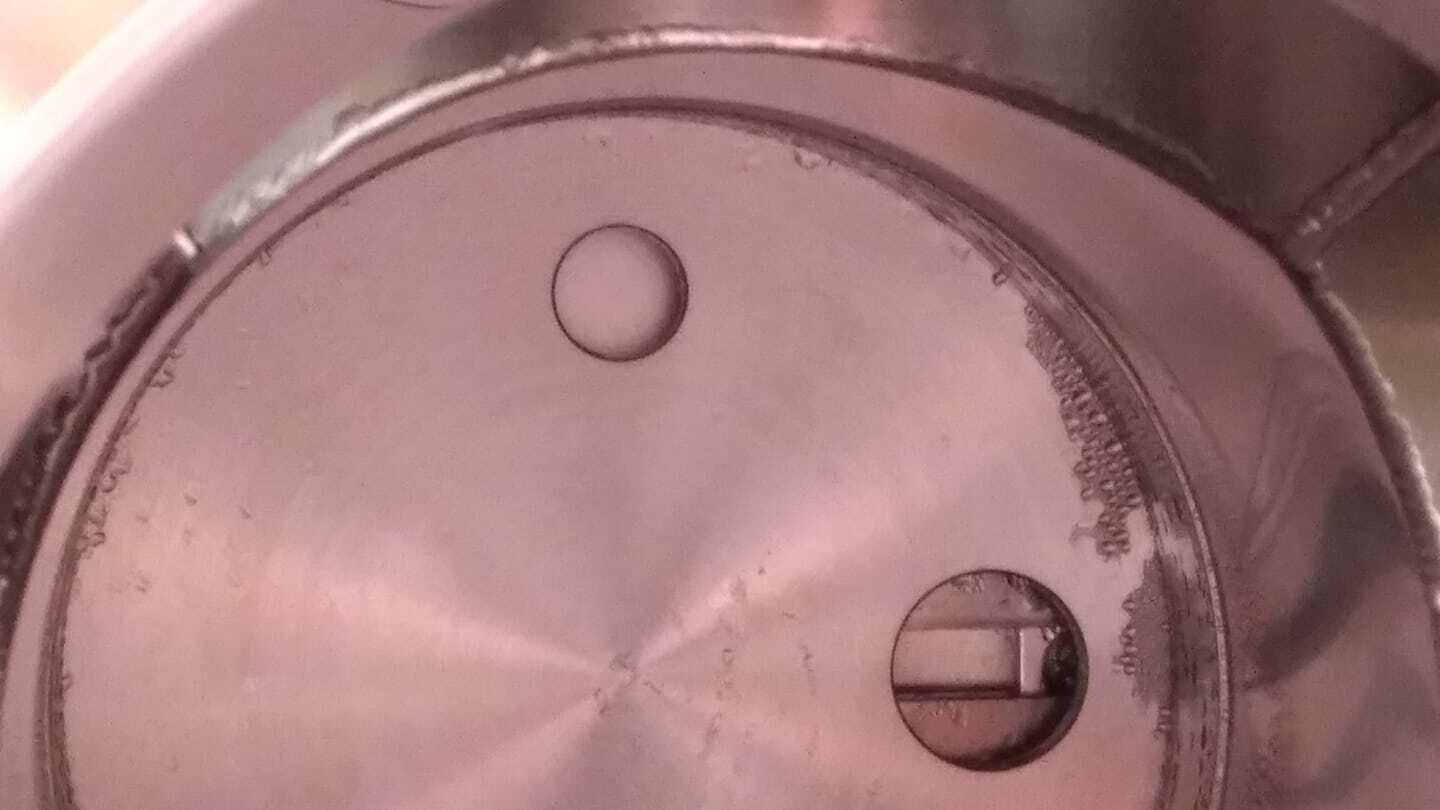 On first sight I thought this had been water vapor which would be easy to remove (just close down the chamber, heat to at least 110 degrees Celsius and pump for 24 hours) but unfortunately it turned out to be some oily stuff. Usually if you’ve got oil vapor inside your chamber that’s pretty bad and since oil vapor may deposit on all surfaces leaving just an a few atom layers thick surface - despite the bubble formation at some cold spots in the chamber that accumulates the most stuff which one of course should reduce as far as possible by simply wiping it with Acetone - that you cannot spot by eye that covers everything you’re doomed. You then usually have to disassemble and chemically clean the chamber in ultrasonic baths using Acetone or flush it using reactive gasses (be careful with that). Using Acetone is also worth a first try in case of any contamination at reachable surfaces - but oil vapor usually reaches all exposed surfaces in your chamber so it requires really rigorous cleaning.

There is another way though - baking a vacuum chamber at 400 degree Celsius is usually a good way to remove any surface contamination but pretty hard to achieve since many components - such as turbopumps, vacuum gauges, etc. - are not capable of withstanding high temperatures. Turbopumps for example many times use bearings on their high pressure side that are using some permanent lubricant embedded in Teflon and require rather low temperatures on their flanges - this might even pose a problem when baking against water vapor.

So the first thing when one encounters such a problem is determining what the contamination is and if there really is an oil film on the inside of the chamber. There is a nice and easy method to get a hint if this is possible - looking at the wetting of an water drop dropped onto the stainless steel or aluminum surface of the chamber. Water is usually wetting on steel surfaces. 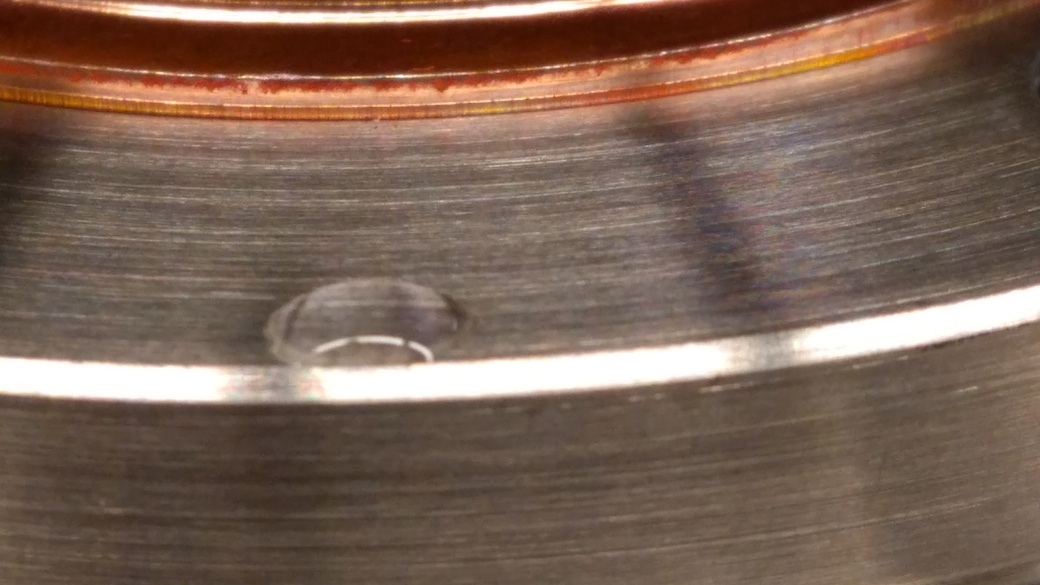 On the other hand oils are usually hydrophobic so the drops volumes forces are higher than surface forces and thus the drop is more spherical - this leads to less contact surface and less tendency to spread out on the oily contaminated surface. 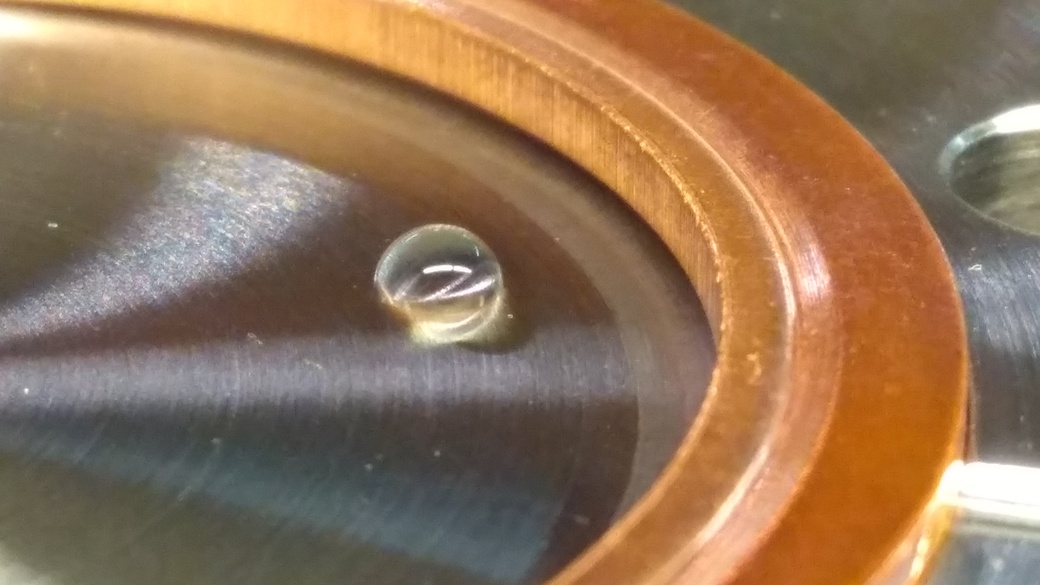 Drops while heating the surface

To determine if heating the chamber had any chance to remove the oil film it has been interesting to just heat up a contaminated CF40 blind flange and check with distilled water droplets to see the change in behavior at about 20 degree Celsius steps.

I’ve created a rather long video showing the behavior of water drops on the contaminated inner surface (i.e. the area inside the knife edge that has been exposed to the vacuum chamber) to the behavior of the water drops to an uncontaminated area (outside the knife edge) at various temperatures. Note that the contamination is not fully homogeneous though. This video has a rather meditative effect and also serves as a pretty nice example for the Leidenfrost effect.

As one can see the oil film that has contaminated the chamber in this example was gone after heating to more than 315 degrees Celsius at 1 bar pressure.