Since I’m currently working again with OpAmp circuits - although in a little bit different setting than the circuits that are described below, I thought it would be a good idea to write a short summary about the most basic circuits and some basic characteristics of OpAmps:

I’ve also written a short lists of OpAmps that I’m usually using for various projects as a quick reference by myself.

Please note: This blog post only discusses voltage feedback OpAmps, i.e. OpAmps with voltage outputs and voltage inputs. There are different classes of OpAmps that provide current feedback, current sources and current sinks (sometimes even mixed). Refer to the specific datasheets in this cases. A voltage sink has a high input impedance, a current sink a low input impedance. These amplifiers are then called trans conductance amplifier, trans impedance amplifier or current amplifier (depending on the feedback network they can be realized with a generic standard OpAmp though).

As usual: Read the datasheets carefully. Operational amplifiers are not exchangeable generally - one has to use amplifiers selected specifically for the given problem

What is an operational amplifier - anyways? 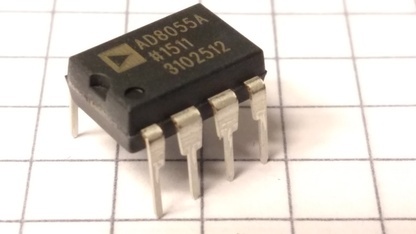 In it’s ideal configuration the amplifier has zero leakage current so no current is flowing into the terminals. As it turns out this approximation fits many applications and depending on the used amplifier the input impedance can be anywhere from a few $k\Omega$ up to many $T\Omega$ which can be seen as $\infty$ in many applications. For applications that require high input impedance and/or work with low currents (it’s reasonable to work with pico and femto amperes with specialized OpAmps) this might require additional considerations. For the ideal OpAmp thou one can assume that

Of course this is also not possible in reality. First off an OpAmp cannot output voltages outside it’s input voltage boundaries. So the amplified signal is also clamped to these boundaries - one would then say it has driven the signal into saturation.

On the other hand amplification can be large but never infinite - the open loop gain of many amplifiers is pretty huge (up to $G=3000$ or $G=10000$). Note that one cannot really use most amplifiers in an open configuration in an sane way though - one really has to read the datasheets for which gains these amplifiers are designed. The real gain will then be determined by the feedback network configuration that will also determine the behavior of the amplifier itself - which the remaining page will be about. Note that only a special class of amplifiers is capable of providing stable unity gain ($G=1$) and only a really small subset is capable of being used in open gain configurations. Read the datasheets.

Usually operational amplifiers require power supply decoupling. This is not shown in the configurations discussed below but it’s a crucial part of stable operation. The standard decoupling network that works most of the time consists of a metal film capacitors in the range of a few $0.1 \mu F$ down to $pF$ (depending on the frequencies in use) and parallel electrolytic capacitors in the range of $30 \mu F$ as close to the operational amplifier as possible - and separated from the signal traces on the other hand.

This is another crucial parameter that’s forgotten often by beginners. The gain bandwidth product is exactly what it sounds like - the result of multiplying the selected configured gain (by the feedback network) with the bandwidth of the signal that should be amplified:

There usually is a limitation on the achievable gain at a given bandwidth - the higher the gain the lower the bandwidth. Datasheets usually contain a fixed number as well as a graph describing this relation. Be sure to check these graphs in the datasheet while selecting your OpAmps.

Depending on your signal it might be required to provide DC decoupling - this is usually done by a really small capacitor (for example $1 pF$) that’s used in series to the OpAmps input inside the signal path - or even only a coupled transmission line when using microstrip configurations.

The most basic network to provide impedance matching is a simple Pi-Type matching network - but these won’t be handled by this blog post anyways.

The most basic OpAmp circuit that’s possible. It’s purpose is to provide a high impedance input (depending on the OpAmp between a few Kilo- to multiple Terra-Ohms) and a low impedance output - one can also call this a buffer amplifier. It can be used in many applications:

Since the OpAmp amplifies the difference between the inputs it tries to bring their difference to zero since the output signal is fed into the inverting input of the OpAmp.

As one can see the voltage gain is determined by the feedback loop. The output signal always has the reverse polarity as the input signal. This configuration in fact also allows for amplification factors smaller than one depending on the configuration. 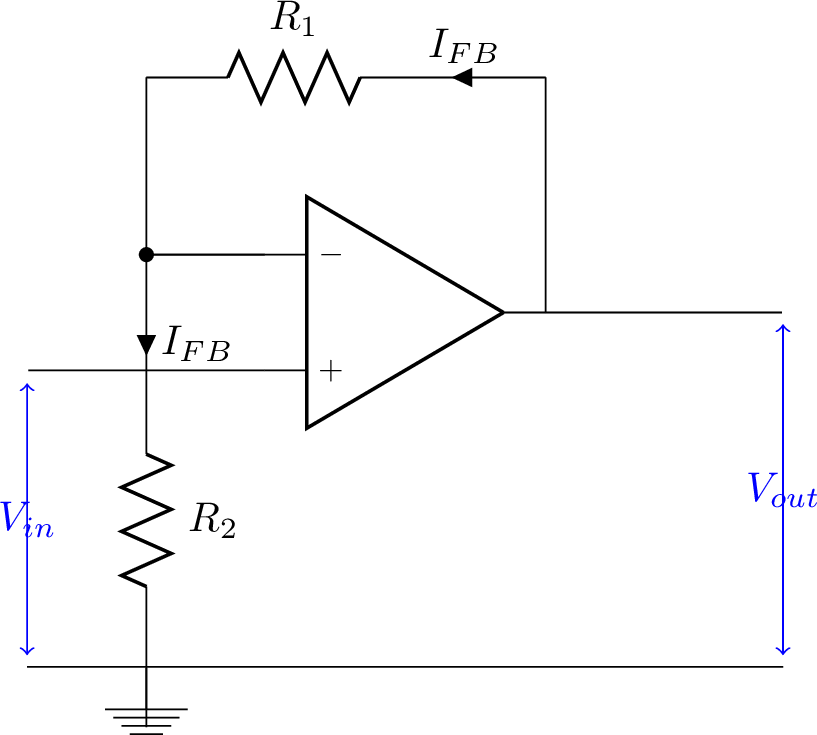 As one can see $R_1$ and $R_2$ are composing an voltage divider against ground. One can calculate the total current over the divider since one can again assume that the current into the inverting input of the amplifier is zero and then calculate the voltage drop across both resistors and then require the OpAmp trying to pull the difference between both potentials $U_{in}$ and $U_2$ to zero again:

The trans impedance amplifier is a circuit that is usually used to measure low currents - for example from a photo-diode - with an high impedance amplifier. Typical amplifiers to use have input impedance in the $T\Omega$ range, for example the ADA4530 (larger than $100 T\Omega$) or the OPA657U (about $10 T\Omega$). These high input impedance lead to leakage currents below $1 pA$ (or even $20 fA$ for the ADA4530). If one measures currents much larger than the leakage current one doesn’t have to account for them, as soon as one gets into the same magnitude leakage currents get relevant and measuring currents below this boundary is not possible. 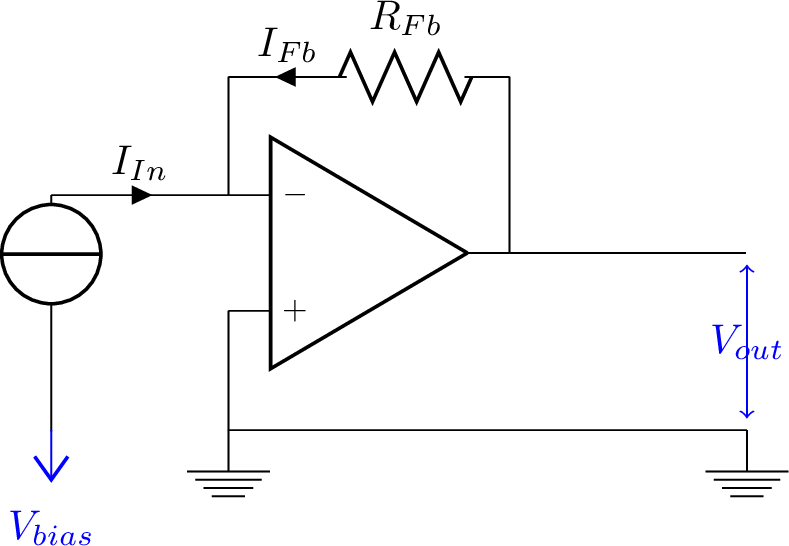 Since for an optimal OpAmp no current would flow into our out of the inverting input one can assume that the current on the input of the circuit is the only other current flowing out of the summation point:

The selection of the feedback resistor determines the gain. For example if one wants to amplify a current from the $1 nA$ range into about $10 mV$ range one would have to use an resistor of about $10 M\Omega$. But of course one also has to account for the noise. For really low currents one has to carefully follow the recommendations from the datasheets (including board layouts - forget breadboards, do the real thing) and usually use a second and possibly third amplification stage.

Applications in high noise environments (for example particle accelerator instrumentation) keep the pre-amplifiers as close to the measurement points as possible and provide proper shielding - i.e. having the trans impedance amplifier as well as one or two pre-amplification stages there - and sometimes use analog pipelines to shift the signal via an optical converter via fiber outside of the noisy environment in an optical fashion which also solves problems with high bias voltages, etc. Usually you should not do it the following way (even though this turned out to work pretty well): 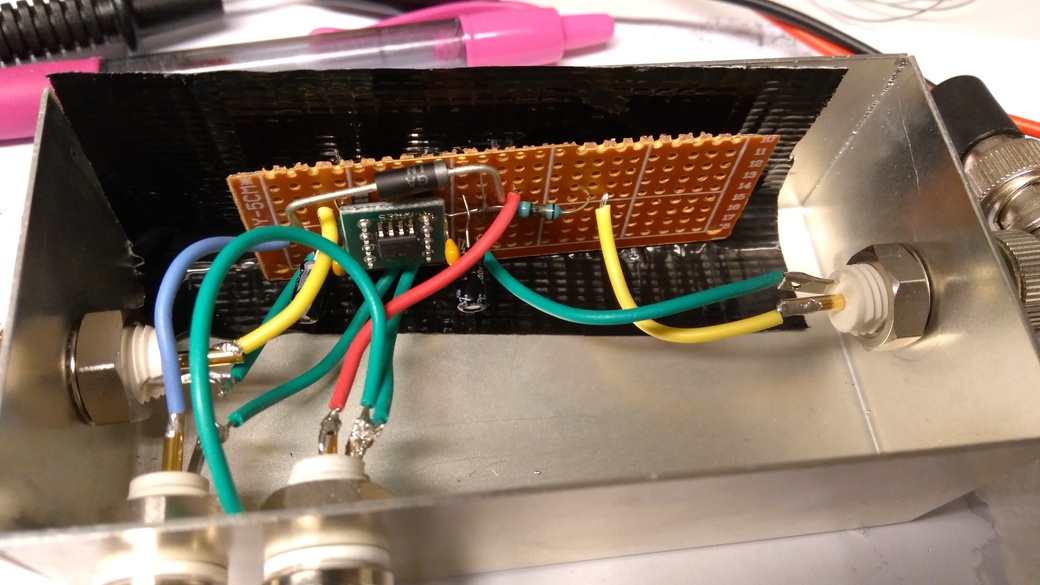