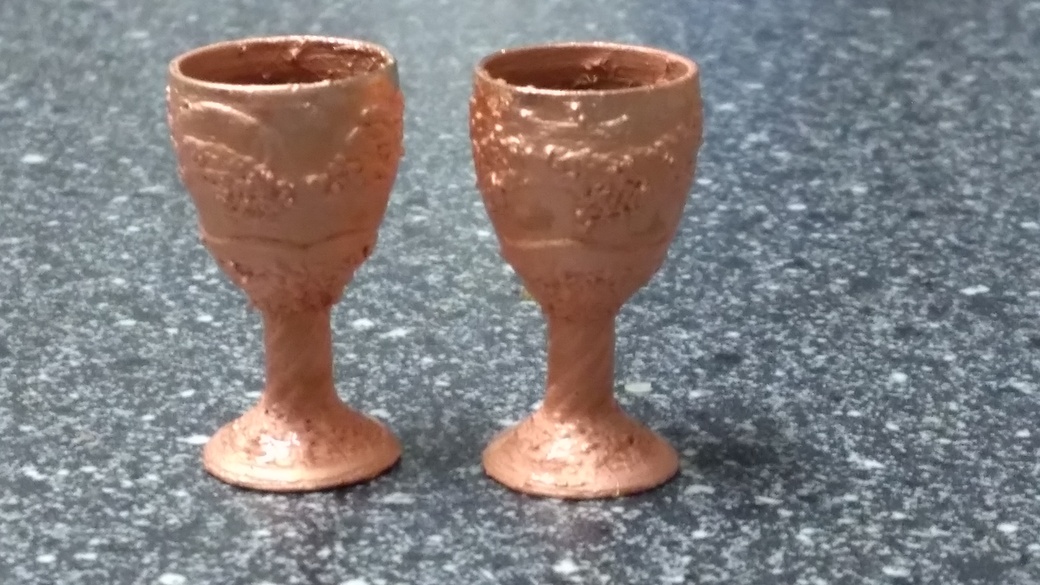 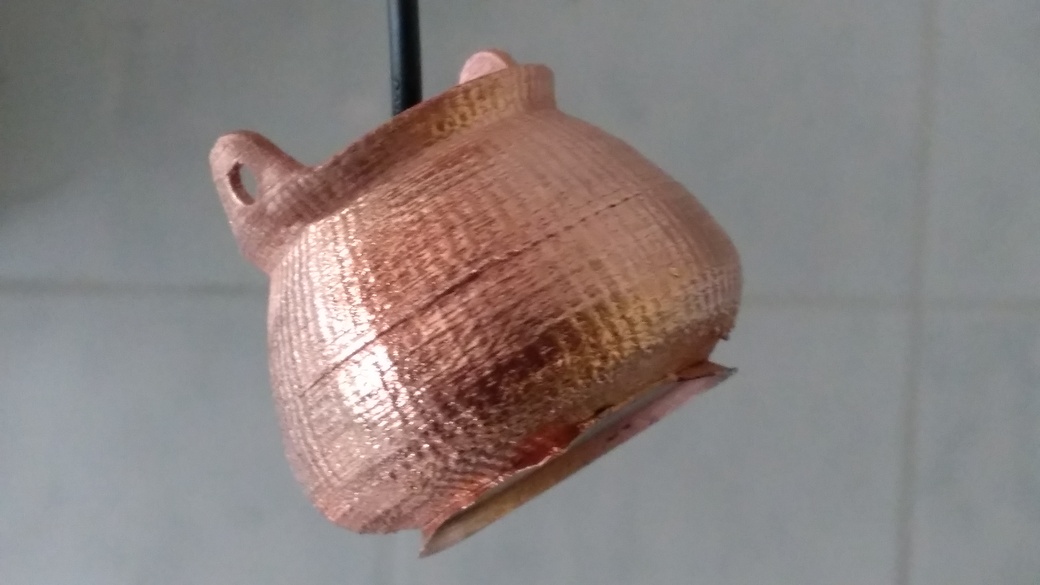 Sometimes you want to 3D print metal objects - but usually homemade 3D printers are currently not capable of printing metal objects like high end laser sintering machines are. On the other hand it’s often not possible to use traditional machining methods when working at home. In case one just wants to get the look and feel of metallic objects one might use filaments that embed metal particles in a plastic matrix - these also exist for wood and stone objects, some for magnetic materials and some are even conductive after the print; these filaments are usually flexible and pretty expensive though. Another way is plating the plastic using a galvanic process.

What is a galvanic process? Electroplating or galvanic deposition is the process of using an electrical current to deposit metal ions by an reduction process onto a target surface. This is usually done in a specific electrolyte. This usually requires a conductive target surface - and one requires different electrolytes for different materials. One should also note that it’s of course not possible to use every metal on every surface - for example it’s not possible to coat Nickel surfaces directly with Gold - one usually uses a Palladium interface layer in this case. Also some materials are hard to coat at home while industry uses cyanide baths - for obvious reasons that’s not a good idea to do at home.

For a more detailed description of the process and it’s limitations there is an excellent paper with the title Improved current efficiency equation for the electrodeposition of copper in the journal of applied electrochemistry.

Personally I started this project because I wanted to plate some 3D printed parts with a conductive surface to be used in vacuum later on, in this blog article I’ll focus on some pure decorative objects though.

Since you’re working with chemistry you should use gloves if you do not feel really comfortable working with sulfuric acid and acetone. Do these works in a well ventilated area. It’s easy to evaporate enough Acetone to get an explosive atmosphere and the vapors from sulfuric acid as well as acetone are not healthy either. If you don’t feel well after accidentally inhaling or coming into contact with this stuff consult medical assistance. And keep in mind that Acetone dissolves gloves really fast.

The electrolyte should be kept in a separate receptacle that you’re using for plating. In the best case this receptacle should be closeable so that you can store electrolyte inside as long as you want to reuse it. It has to be large enough to enclose the anode(s) as well as the workpiece(s). 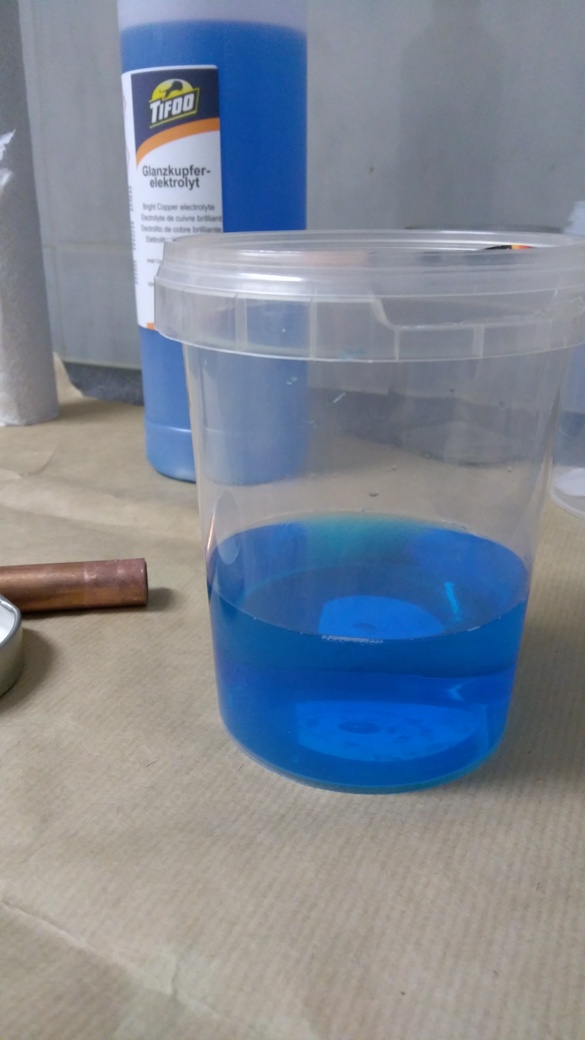 First clean the object. The cleaner the surface the better the result. Use Acetone for that for example. You should not touch the object with your bare hands especially if you’ve more oily hands. If you don’t leave fingertips on bare glass anyways you don’t have to worry that much.

Apply 4-5 layers of graphite spray on top of the PLA objects. Let the paint dry between the different layers. At the end the surface resistance should be around $1 k\Omega$ to $2 k\Omega$ between the farthest points of the object. 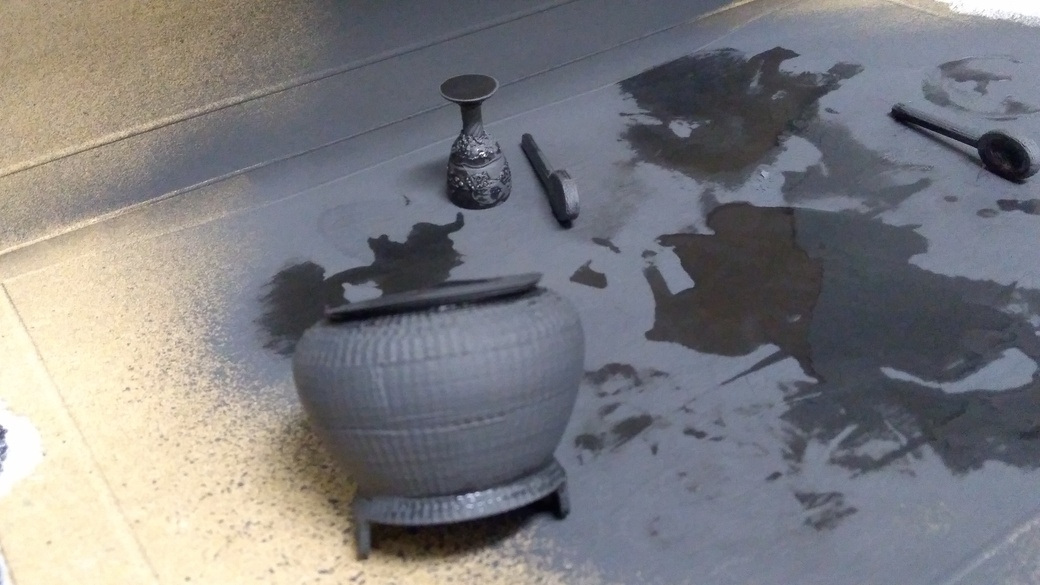 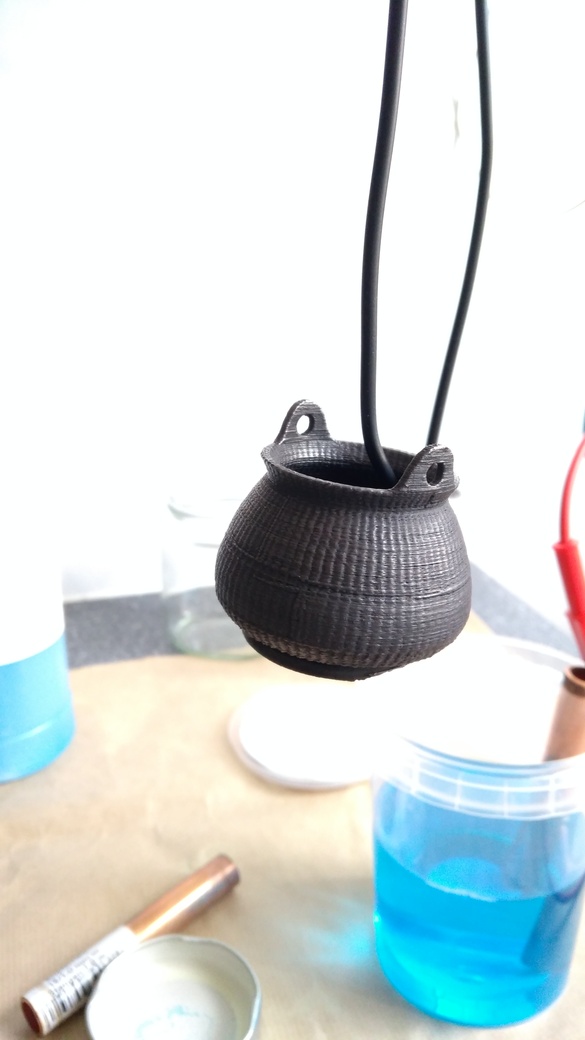 When the object is ready first clean the the anode (that’s the source of copper, not the object) using Acetone and steel wool and put it into the tank. Attach it to the positive terminal of your power supply. Never let your anode or object linger around in the electrolyte while not plating though.

The distance between anode and cathode should be maximized if possible - and the distribution of the anode around the object should be as even as possible - or the object should be turned periodically. It’s also a good idea to have an anode surface at least as large as the target surface though it works also using just some kind of tube as shown on the photographs below. 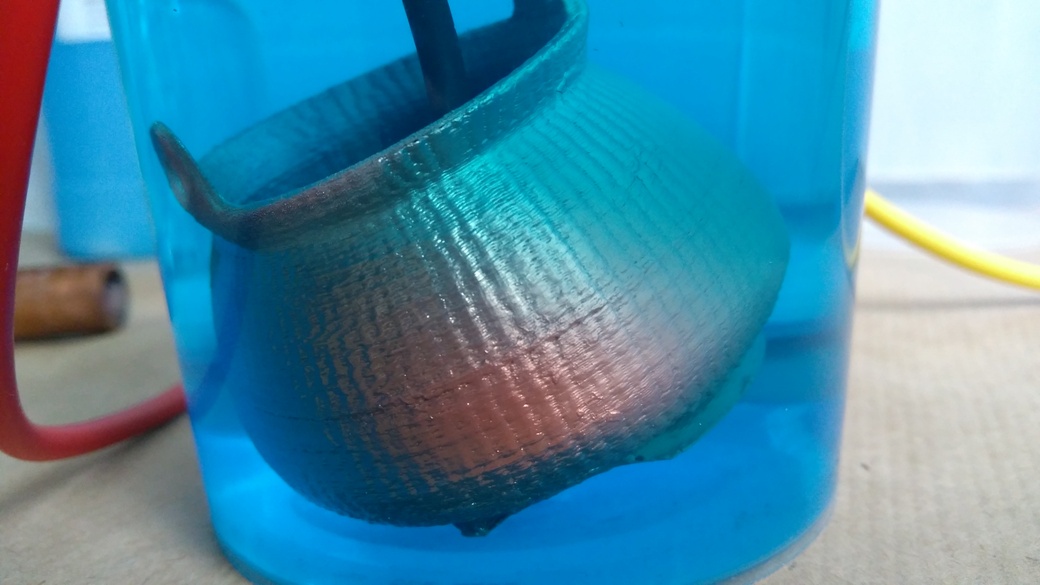 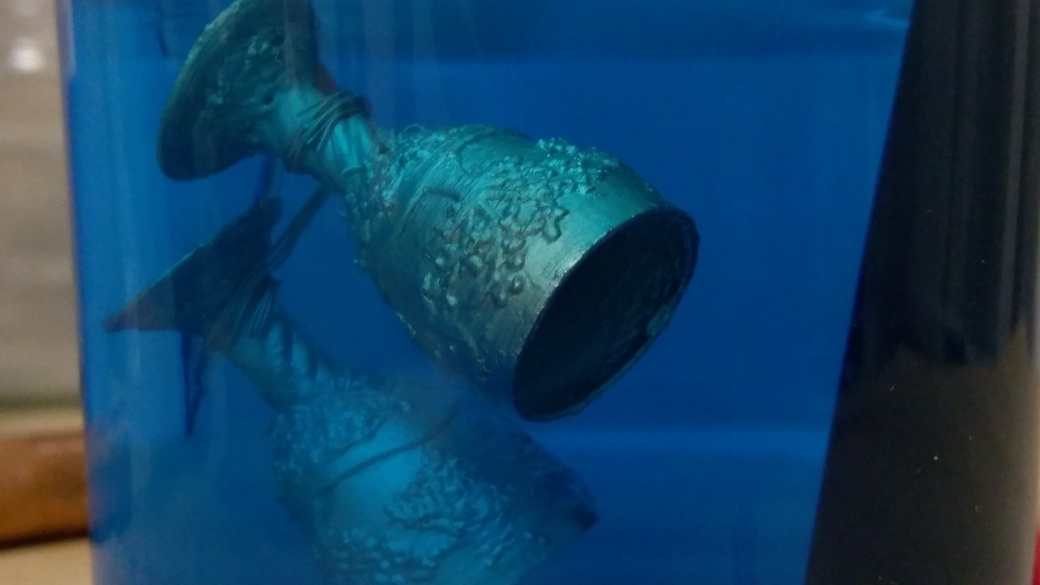 Turn the current limiting to zero. Optionally turn up the desired voltage to around one to two volts.

Crank up current slowly. Note that lower current means slow coating speed but also higher surface quality. Too high current leads to uneven deposition as well as burning of the graphite layer. If you see something smoking current is way too high. As a rule of thumb the current density should be around $50 \frac{mA}{cm^2}$. I’ve reached the best results with plating currents of up to $300 mA$ in the beginning and up to $800 mA$ in the end for small objects. 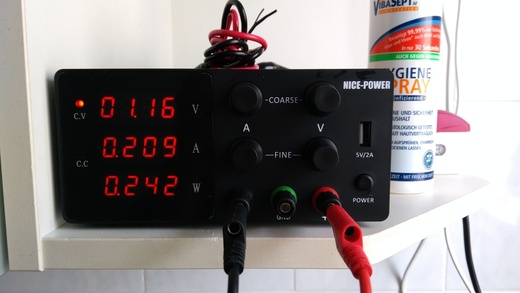 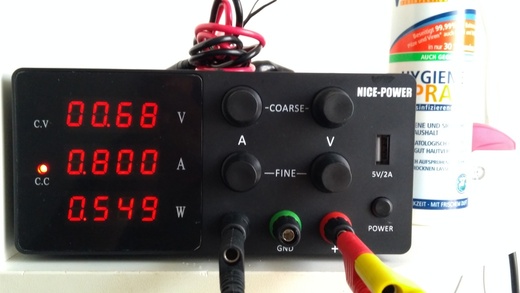 After the coating has been successful disable the power supply and remove the object from the receptacle. Rinse with clean water for a longer period of time. It might also be interesting to let the object dry for a longer period and rinse multiple times since it’s air pockets are still filled with electrolyte after removal. After cleaning one might want to apply passivization lacquer such as Zapon to prevent any further change in color or corrosion.

You might want to polish your workpiece after plating.

Also take out the anode, rinse with clean water and clean with steel wool if you want to use it again at a later moment. Close the receptacle containing the electrolyte or transfer into the storage container. 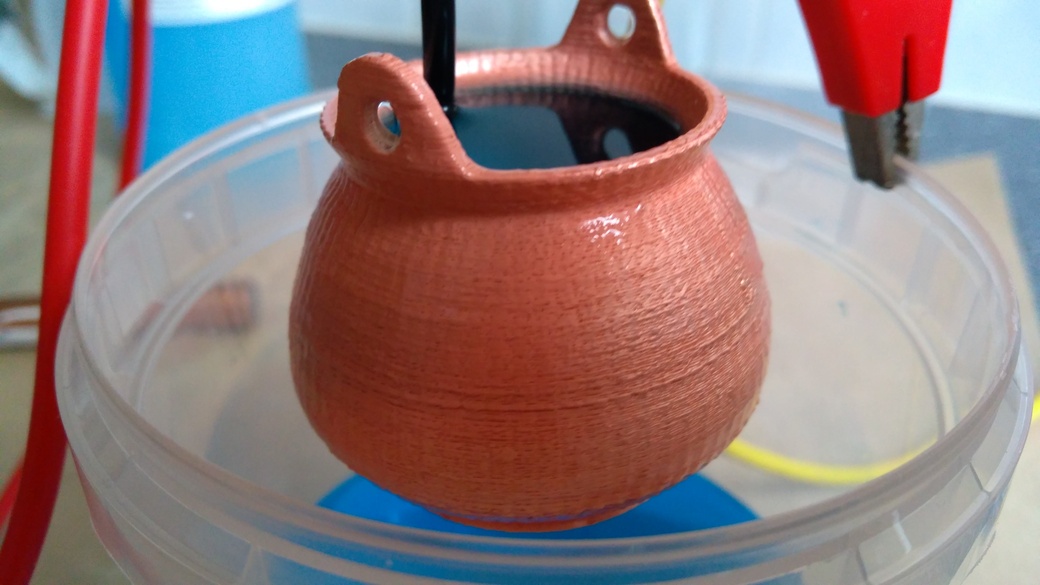 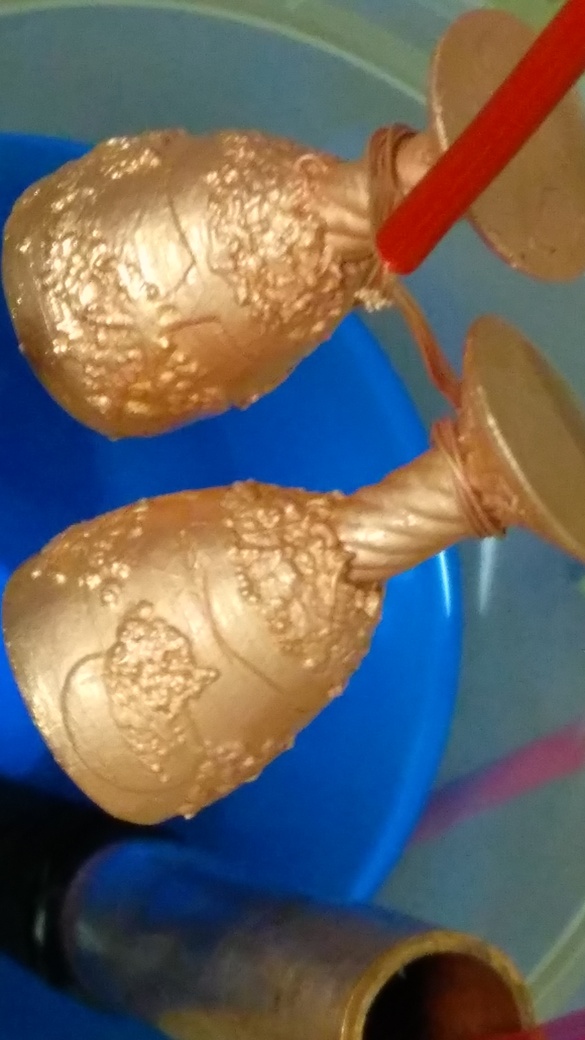 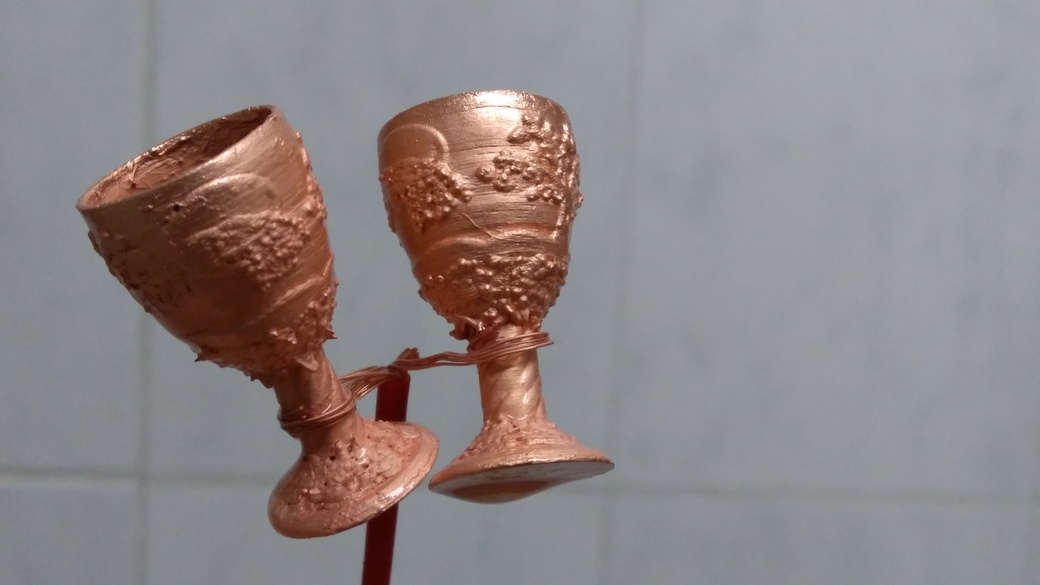 Note that the electrolyte contains copper and thus has to be disposed as hazardous waste. Follow your local regulations and stay responsible. Copper is a toxic substance if released into the environment in larger quantities - with the amount contained in one liter of electrolyte you could already render a few square meters of land unusable for any further farming and it will be washed out by rain. Do not simply pour copper solutions into the environment or into your local wastewater system.