An easy way to grasp some information about a dataset is to plot it in an graph. The two most basic used diagrams are frequency diagrams and histograms. The frequency diagram is mostly usable for discrete values - one simply defines the absolute occurence of events for each value and plots that as the $y$ value of an diagram. 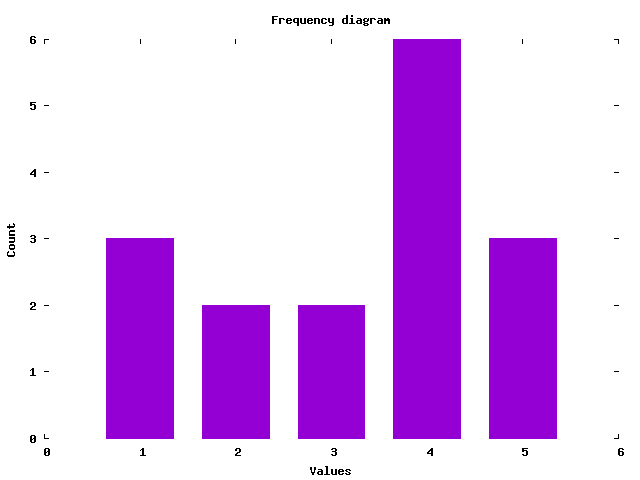 The frequency diagram provides a fast overview for discrete values but is unuseable for continuous scales. This is because on a continous scale one could have an infinite number of values for each tick of the diagram - in case of an ideal measurement the likelihood of the same measurement to ever appear again would go to zero for an infinite amount of measurements.

To circumvent this problem one can use histograms. Histograms use bins to accumulate data in the same range. For example when one would measure lengths and gets a bunch of data like the following:

The catch in this case is that the bin widths have to be choosen not to be the same width. This is of course an arbitrary choice and may make not much sense. The problem with choosing different widths is that - without some kind of rescaling - this would lead to a totally wrong impression. Because of this one rescales the height of the histograms by their width so total area represents the total count again: 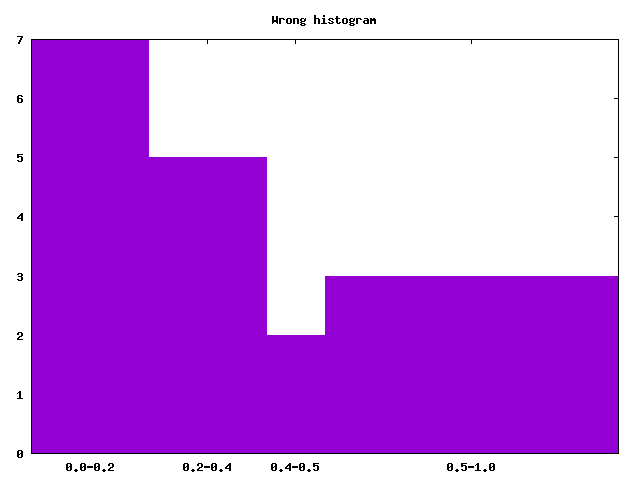 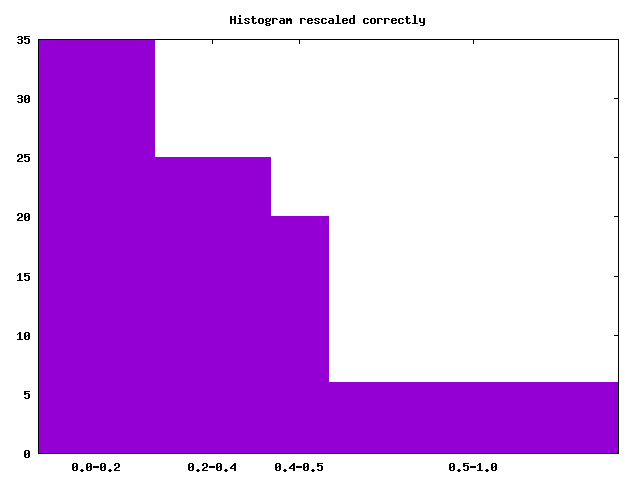 In this case an arbitrary scaling factor (the raw width of the histogram bin) has been used so the total value on the second axis does not really represent anything. One could rescale this of course to probabilities or other values that make more sense.

The following lists some commonly used figures used to classify data. Basically these will be used to describe the central position or generally a figure of position of data, a figure for spread of data and a figure for skew or symmetry of the data.

The central position tells one where the (proposed) center of the data lies. The two most commonly used figures are the artihmetic mean as well as the median.

The median is a value that can be evaluated as soon as the order of values is determineable (i.e. it can be used for ordinal data). It’s defined to be the value that’s existing in the center of the ordered list.

As one can see for the definition of the median in the even case the addition (and therefore the distance) between values also has to have a meaning.

Note that for odd counts the median has to be one of the data values but may not be contained in the datalist for even counts since in that case it’s calculated as an average. 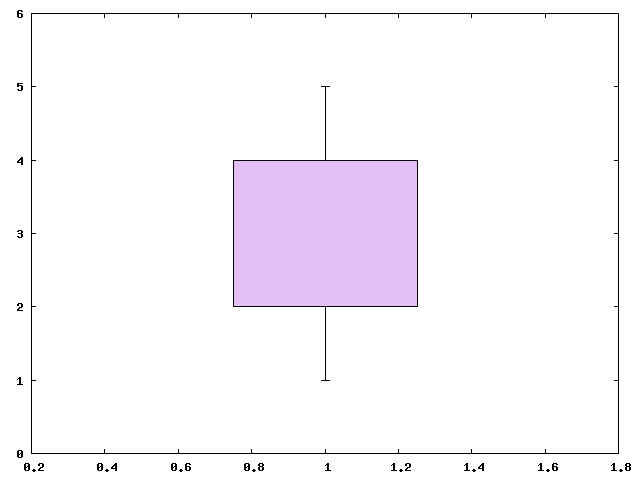 In this case on is not capable of determining the median from the boxplot but one can easily recognize the minimum, maximum and $Q_{0.25}$ as well as $Q_{0.75}$. One can also determine that the median has to be equal to $Q_{0.25}$ or $Q_{0.75}$. The main power of interpreting a boxplot is based on the fact that every quartile contains at least $25%$ of the data points.

The arithmetic mean is one of the most commonly found figures. It can be imagined as describing the center of mass of the datalist. It’s defined as

It’s of course not meaningful for ordinal scales because distance is a central element to meaningful perform addition of values.

Note that the arithmetic mean doesn’t have to be contained inside the datalist. For a highly spreaded dataset if could even be a value that’s having the largest distance to all datasets inside the range of all values.

This is a less common seen positional figure. It’s the center of the shortest interval that contains $\frac{n}{2} + 1$ datapoints. Since it minimized the median of squared differences it’s extremely robust against measurement errors.

Has a similar definition than the LMS above but uses the arithmetic mean instead of the median.

The positional attribut itself doesn’t tell one much about the data. All datapoints may be near the positional measure or they may be far away. The spread has to fulfill

The variance is defined to be the squared standard deviation.

The span could also be used instead of the IQR (i.e. calculating $\text{max}(x) - \text{min}(x)$). Of course one looses resistance against outliers.

How four field analysis works will be described in the section about probability.

A scatter plot is simply a plot that displays one data coordinate on one axis and the other coordinate on the other axis. Of course both axis can be scaled to the required dimensions.

First one defines the standard scores for both dimensions separately:

The empiric correlation coefficient can then be defined as